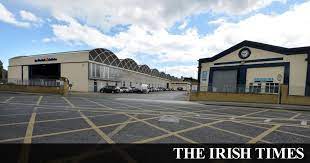 I arrived in Dublin after driving through fog, sleet and snow on the motorway from Galway.

The 252-room gibson hotel, spelled with lower case “g”, is located on the north bank of the River Liffey, in the revitalized Docklands district, and the warm glow of lights within the hotel’s glass-cube façade was a welcome sight on a darkening winter afternoon.

Once a ship-loading center for livestock, the site of a smelly fertilizer plant, and a dumping ground for city sewage, Docklands is now a stunning urban renewal project that includes not only this hotel, but a Kevin Roche-designed convention center, a theater by Daniel Libeskind and one of Santiago Calatrava’s signature swooping bridges.

Dublin is most often associated with such literary greats (Jonathan Swift, James Joyce, Oscar Wilde and George Bernard Shaw), the musical group U2, and the lively pubs along Temple Bar, the city’s friendly but raucous two-block pedestrian street where Guinness is most likely the name that gets the most attention.

During the past decade, however, the city’s star attraction has been the collection of structures and streetscapes that form the Docklands district, which began to take off during Ireland’s “Celtic Tiger” period of the 1990s, and crested in 2010 with the opening of the convention center and the other buildings.

Then the bottom fell out of the Irish economy, and current construction projects on several buildings, including an almost-completed five-star hotel next to the Grand Canal Theatre, have stalled.

The Docklands project, organized and run by The Docklands Development Authority, has transformed the east end of Dublin from a lonely and forlorn industrial and shipping area into an interesting, post-modern downtown neighborhood where dazzling modern buildings compete with the city’s more traditional Georgian architecture.

On the south side of the River Liffey a spacious plaza, known as Grand Canal Square, designed by the American firm Martha Schwartz –Partners, has a cascading marble fountain and a series of tall, glowing light sticks that gives the site an amazing vibrancy.

Located on the square is the sharply angled, stainless steel Grand Canal Theatre, designed by the Libeskind.

During several days walking around Docklands, I felt that the entire project seems to be a wonderful example of a futuristic-looking, inner city environment that manages to meld Dublin’s cultural, business and residential interests into one cohesive neighborhood.

Its proximity to gritty neighborhoods in north Dublin, and to the docks just beyond its eastern boundary, help Docklands avoid being called “sterile,” and provide a desired sense of reality to the lovely looking but expensive residential apartments and glittering glass facades of the commercial spaces.

The Roche-designed Convention Centre Dublin appears on the river bank as a glass drum leaning against a concrete box, but the view from inside the building, of Calatrava’s Samuel Beckett bridge, and the city skyline beyond, puts everything into perspective. Roche, a Pritzker award-winning architect, was born in Dublin but moved to the United States in 1948, where his designs for the Oakland Museum in California and the Ford Foundation building in New York City, moved him into the top tier of world architects. The CCD is the first carbon neutral convention center in the world, and Roche’s first architectural commission in Ireland.

Staying at the gibson hotel, at the far end of North Wall Quay, an area known as The Point, I had ample opportunity to look at, and learn about, the O2 Arena, which was just outside my hotel room window. While most new buildings in Docklands draw attention to themselves because of their architecture, the O2, named after the British telecommunications firm, is an interesting conversion of a building with an oft- tumultuous history.

In 1988 Irish entrepreneur Harry Crosbie, along with the company that would become Live Nation, converted an 1878 train station, known as Point Depot, into the Point Theatre. The Irish band U2 was the first group to play there, and they in turn showed up to open the present O2 Arena on the same site in 2008, after Crosbie renovated the old theatre’s interior into a larger space. The exterior maintains the original 19th-century Edwardian rail depot façade, and a large, corrugated, translucent box on the roof lets the pulsating lights shine through during evening concerts.

Architecturally-motivated international visitors flying into Dublin Airport can begin their tour right away, just by exiting the airport’s new Terminal 2. The British firm, Pascall+Watson created a striking glass and steel terminal building that will help put thousands of jet-lagged arriving passengers in a better mood. The terminal, with its large, blue-glass elevators, spacious baggage and check-in areas, and numerous passport and customs check-points, opened at the end of 2010.