Blac Chyna Pregnant- Everything You Should Know 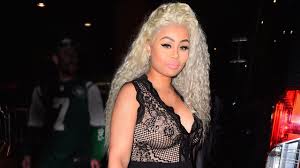 Some months earlier Rob Kardashian announced Blac Chyna pregnant with a baby girl. Now in a few weeks Rob Kardashian is expected to become a daddy. Set Entertainment has come to know that their baby girl will be born around November 10. Bth have had a struggling relationship and had to confront law a couple of time. But this is certainly a joyful time for both Blac Chyna and Rob Kardashian.

Blac Chyna already has a son named King Cairo. She has earlier disclosed her plans with Rob Kardashian. She said that she wants have more kids with Rob and the she is just not done yet.

When earlier Rob and Chyna announced the pregnancy there was a huge backlash. This was not only from the fans but also from their family. This became evident from the show “Keeping Up with the Kardashians”. In the videos it can be seen that Kim Kardashian was not much excited about the pregnancy of Chyna. It can also be seen that Khloe Kardashian congratulate Rob and then later say that she is internally sad.

She also told the camera the she does not thinks of babies as a blessing. She also mentioned that she does not know what the future holds for them.

BLAC CHYNA PREGNANT- IS ROB THE FATHER?
The couple was trolled a lot in the internet and there was also backlash. On of he biggest questions raised at that time was that whether Rob was the father for the baby. It surely might have been difficult for the pair when they would have come across it.

The Chyna stood up to silent the critics and the trolls. She took a paternity test during an episode of the show and revealed the result.

BLAC CHYNA PREGNANT– REACTION OF THE COUPLE
When Chyna and Rob came to know that they should be expecting a baby girl it was a happy moment. Rob also mentioned that the he is happy the baby is healthy as of now. Moreover he expects to have a great tie with his baby girl.

BLAC CHYNA PREGNANT- WHAT TO EXPECT?
Now as we all know that the couple is expecting a baby girl, let see what happens in the future. Balc Chyna is expected to give birth around 10 November. We hope that everything goes fine for both Rob and Chyna. Let see how the Kardashian family reacts at that moment.