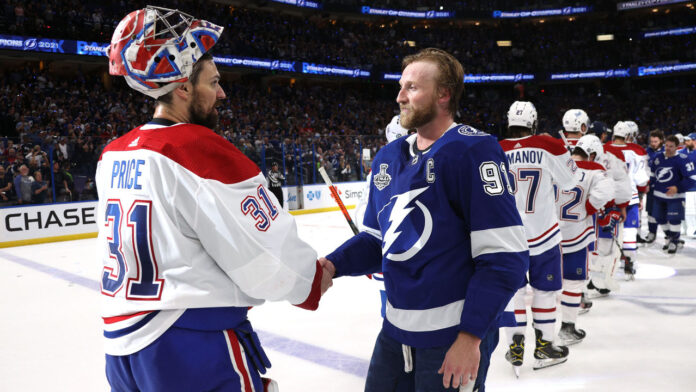 Bruins: The demons of their epic four game collapse against Philadelphia two years ago were finally exorcized after a thrilling run to the NHL’s biggest stage. With a Game Seven win over the Vancouver Canucks, the Bruins proved to the rest of the league that their defense-first-score-enough-to-win mentality was a proven winner and ended 39 years of Stanley Cup frustration in the process. GM Peter Chiarelli made all the right moves before and during last season’s remarkable run, acquiring Nathan Horton, Tomas Kaberle, Rich Peverely, Dennis Seidenberg, and Gregory Campbell. Each played a crucial role in the depth and versatility during each of the B’s playoff series. As all the experts say, goaltending is the determining factor to how far teams can go during a playoff run. It’s safe to say Tim Thomas lived up to that challenge, picking up some extra hardware, the Conn Smythe Trophy for playoff MVP. Thomas outdueled the Canucks Roberto Luongo during the seven game cup battle and proved that the old men (Thomas turned 38 during the Stanley Cup run) can be put in the spotlight and outshine the youngest of superstars. Now it’s time to defend their title and with most of the club’s key pieces returning, it’s a strong possibility that Boston will get that chance. The line of Milan Lucic, David Krejci and Nathan Horton was tremendous during the playoffs. Brad Merchand was a pleasant surprise and will be counted on to supply more offense. With the unfortunate loss of center Marc Savard to lingering concussion symptoms, rookie Jordan Caron and sophomore Tyler Seguin will need to step up. The defense and goaltending are the strengths of this club. Captain Zdeno Chara and Seidenberg formed quite the shutdown pair and Thomas and Tuukka Rask pose as one of the best 1-2 goaltending combinations.

Sabres: With a motivated owner willing to spend what is needed to be successful, the boys from Buffalo have a renewed sense of optimism for the upcoming campaign. After a disappointing first round loss to the Flyers this past spring, the Sabres lineup remains, for the most part, intact with a handful of key acquisitions. Up front, Buffalo added versatile forward Ville Leino via free agency. Management sees Leino playing center more often than he did with his time in Philadelphia last season but can be thrown on the top line and play as a winger. On the backend, the Sabres improved dramatically with the additions of Robyn Regehr and Christian Ehroff. Regehr, acquired from the Calgary Flames, will eat up big minutes, play physical and provide a calming influence on a relatively young defense core. Ehroff, the Sabres big money free agent signee, is a great puckmover and outlets a great first pass out of the defensive zone. He can also quarterback the power play and kill penalties. Throw in rising star Tyler Myers and dependable Jordan Leopold and it’s easy to see Buffalo has a good mix of offensive and defensive minded backliners. Goalie Ryan Miller can steal games for the Sabres on any given night. His string of 31 consecutive starts shows he can battle hard on little rest. His 34 wins and .916 save percentage were a product of his work ethic and no-quit attitude. However, Jonas Enroth will need to get more action, mainly to give Miller a breather during those long stretches throughout the season. Wear Miller out and the Sabres could find themselves hurting rather than helping their cause. But if they get solid contributions from their big guns, including Derek Roy, Jason Pominville, Thomas Vanek, and Drew Stafford, Lindy Ruff’s Sabres may give Boston a run for their money in the divisional race.

Canadiens: Compared to the rest of the Eastern Conference, Montreal remained relatively quiet in the offseason. They did sign 6’2, 205 lb. winger Erik Cole to a four year contract. He works well in the corners and should bring in some added size and toughness, something the Habs lacked for most of last season. Elsewhere up front, the team has some natural playmakers in Tomas Plekanec and Scott Gomez. What the Canadiens really lack are finishers. Mike Cammalleri can score with the best in the league, when he’s dialed in. When he’s cold, he becomes the invisible man on the rink. Brian Gionta also has a license in sniping but doesn’t shoot the puck enough. If he, Cammalleri and Cole score regularly, the Habs top six forwards are very effective. Offensive depth may be an issue this year, as the third and fourth lines lack firepower and provide a grittier attack. Defensively, the Canadiens will once again put the fate of the blueline in the hands of injury-plagued Andre Markov. The Russian dressed for only seven games and had more ACL tears (2) than he had goals last year. Josh Gorges also returns from an injury plagued season and P.K. Subban continues to bud into a strong offensive-minded defenseman. Goalie Carey Price showed the Montreal faithful that he is the real deal and that the trade of Jaroslav Halak was the right move by GM Pierre Gauthier. Price was between the pipes for a league high 72 games while posting a 2.35 goals against average (GAA) and .923 save percentage. Couple that with 38 wins and you have a number one goalie for sure. The problems still lie with their 23rd ranked offense. Cole will help but they need more production from their top scorers.

1. Boston Bruins- With most of the cup-winning cast returning, captain Zdeno Chara and the defending champs look poised to be at the top of the Eastern Conference once again come playoff time.

2. Buffalo Sabres- The bulked up defensive presence of Robyn Regehr and Christian Ehroff only make this crafty group that much tougher to score on. Look for the Sabres to turn heads and compete for home ice.

3. Montreal Canadiens- If Montreal wants a playoff spot, Carey Price needs to be great and then some. If the Habs offense can click and the defense is competitive, the Habs will be in the hunt for sure.

4. Toronto Maple Leafs- The Leafs always start slow, play catch-up and compete like a playoff team but fall short. If James Reimer is the real deal, Toronto and their fans may have something to cheer about.

5. Ottawa Senators- Even if Craig Anderson performs well and Daniel Alfredsson and Jason Spezza find their chemistry, the Senators will still be a team in rebuilding.