Skull Earrings as a Symbol of Life, Death, Wisdom, and More 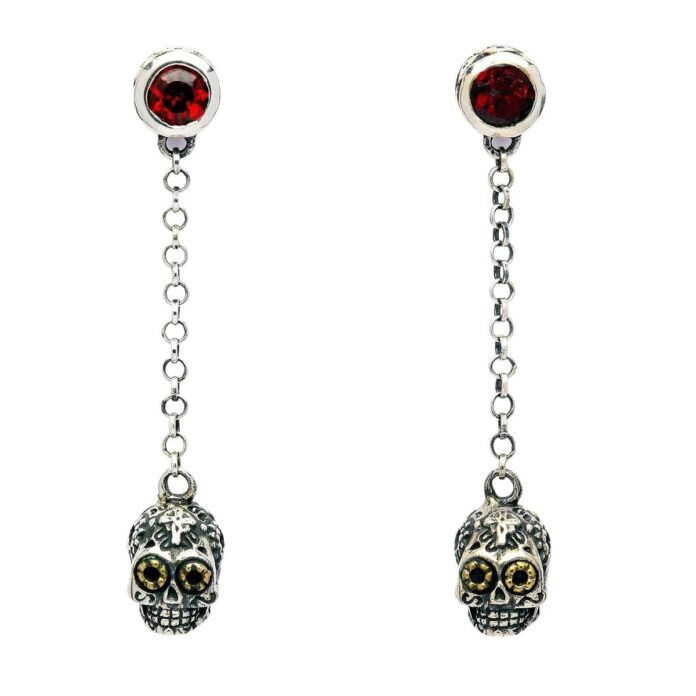 Are you searching for skull earrings to make your look complete? Have you ever wondered what this symbol represents? If you like skulls simply because they look awesome you can stop reading. But if you want to know what the image of a dead head stands for, this post is just what the doctor ordered.

Skulls Are Not Death, They are Life

It seems too easy to assume that skulls represent death. The very look of a dead head is chilling. After all, only death can expose what we have under our skin. The tradition to put skulls on poisonous substances and dangerous things only added more fuel to the fire. Plus, we cannot ignore that infamous Jolly Roger the very look of which instilled fear in onlookers. All these factors contributed to our belief that skulls are a physical form of death.

While all these things are mostly true, the skull isn’t exactly a symbol of death. The truth is that death and life are inextricably linked. One is unimaginable without the other, and death is a natural outcome of everything. But it is not exactly the end of life. After life, our soul arrives in a different world, and it continues to live there. Hence, the death of a physical body doesn’t entail the death of the soul. Over time, this soul should be reborn in a new body. And the whole cycle will continue. The skull is a perfect representation of this cycle.

Another reason to get skull earrings is their role as an amulet.

In the past, people highly revered skulls, they even worshipped them. The skulls of outstanding tribesmen as well as beloved family members were installed in a place of honor in a dwelling. Why? Because our ancestors believed it could protect against death, diseases, ill-wishers, and evil forces. At the same time, the skulls of commoners were buried in the ground around a village or settlement. Again, this was done for the sake of protection. These skulls safeguarded crops, cattle, and the entire tribe from adversity.

Today, people keep believing in the miraculous power of symbols. Bikers, for example, although it doesn’t seem like they are capable of sentiment, wholeheartedly love skulls. For them, the skull is a patron and protector. According to their beliefs, those who wear silver skull earrings, rings, necklaces, and even tattoos will never face death; at least, not ahead of their time. When death comes after a person and spots the skull, it will know that its job is done here and leave.

The Symbol of Equality

When you look death in the face, you are not different than billions of people it has taken before. Everyone is the same when it comes to their last earthly journey. In this case, the skull turns into a symbol of equality.

However, the skull doesn’t erase a person’s individuality. Let’s take motorcycle clubs to prove the point. Bikers appreciate and encourage the individuality of everyone who joins their ranks. At the same time, all full members of a biker club are equal in their rights and duties. They are all members of the same pack, and they must respect its rules and traditions. Those who fail to obey will be banished. However, those who follow the rules will find real friends for life.

The skull served as protection not only for those who worked in fields, gathered the gifts of nature, or hunted. Warriors also applied skull images to their armors or hanged small animal skulls as amulets. This was supposed to protect them from injuries and death. Over time, skulls started being associated with warfare and militarism itself. Armies from around the world had and still have skulls on their insignia. However, for a while, skull symbolism existed in the context of armies unofficially. Looking for skull earrings? You can click Gthic to find more.

The very first mention of a skull as an official symbol of an army, namely the Prussian army of Frederick the Great, dates back to the 18th century. The regiment of “death’s head hussars” was dressed in all black and had a silver skull and crossbones on its tall hats, which signified war and death on the battlefield. The skull became so popular among military men that they began to wear it in civilian life, too. This time, it was no longer about war and death. By this, the military wanted to emphasize their best qualities, such as courage and bravery. Eventually, the same symbol and with the same meaning appealed to those who had never held a weapon in their hands. It basically turned into the mainstream personification of everything that can be packaged in such a comprehensive term as masculinity.

Finally, you may want to have skull earrings because the skull is a symbol of wisdom. The skull accommodates the brain, and the brain is the source of one’s wisdom. Everything is pretty simple.

It is also worth mentioning the ancient tradition of drinking from the skull of an outstanding person in order to take possession of his personality and traits. The skull of a strong warrior was supposed to transfer his strength to the one who drinks from it. In the same vein, a skull of a wise man was supposed to enhance wisdom.

If you are reading this line, congrats, you’ve learned about the significance of the skull as a symbol. So, the next time you flaunt skull earrings, you can choose for yourself whatever meaning they should conduct.