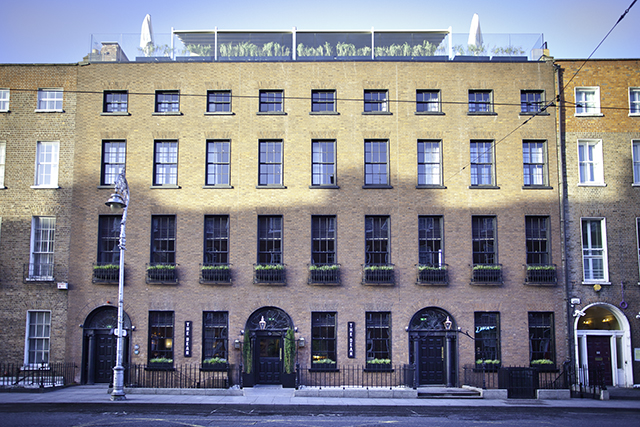 Smack dab in the middle of Providence’s bustling Downcity neighborhood, the Dean Hotel’s name is inspired by the fact that the campuses of three famous universities are located within a 30-minute walk.

As befits its collegiate setting, the 52-room hotel offers the Ivy League panache of Brown University, the imaginative dining of Johnson & Wales University and, most notably, the design pizzazz of the Rhode Island School of Design (RISD).

The hotel strives for a party atmosphere — a painted sign on its side facade reads “For a long time, I went to bed early.” and the neon sign in my hallway proclaimed that it was “Time for another”. But my fellow guests seemed a sedate lot and the service was consistently friendly and accommodating.

Besides its proximity to the universities, the hotel is ideally situated to local institutions like the RISD Museum and the Providence Athenaeum, theaters and live music venues, and the city’s “Little Italy” neighborhood of Federal Hill.

Visitors in town for the weekend will want to make sure to check out the popular happening, Water Fire, which celebrates its 20th anniversary this year. Created by a Brown grad, this art installation involves the lighting — from sundown to midnight — of 80 braziers strategically placed amidst the Providence River and an accompanying street party of food trucks, bands, and the like.

Accents like wood blinds with black slats, vintage armchairs in British tan leather, bentwood, or jute (the pairs differ by room), and a custom-designed iron bed frame and desk produced by a local metal fabricator make for a clean industrial aesthetic.

Some guests may be troubled by the lack of a closet and the fact that the bathroom shower simply occupies a corner of the room, with no real enclosure.

Also missing, though hardly missed: a phone, alarm clock, and mini-bar. (I wouldn’t have minded an empty cooler, though.) There was an iron and a hair dryer, but they were stored, disconcertingly, under the bed.

A fleet of complimentary fixed-gear bicycles stand at the ready. Breakfast and wi-fi are also free.

At breakfast time, a mixed crowd enjoyed java from Bolt Coffee and pastries from Foremost, a local bakery. The relaxed groove and comfy atmosphere of art books, recorded jazz, fresh flowers nicely emulated time spent at the home of the eponymous (fictional) Dean.

When it came to dinner, many options awaited nearby but sticking to the confines of the hotel for one night didn’t feel like a compromise at all.

I began with dinner at Faust, a spot-on beer hall with worsts, schnitzels, and pretzels.

Then, fortified by drink, I dipped into Boombox, a karaoke bar at the back of the hotel, before slipping into a banquette at The Magdalena Room. An intimate speakeasy with classic cocktails, it’s equally great for confessional conversations and solo musings.