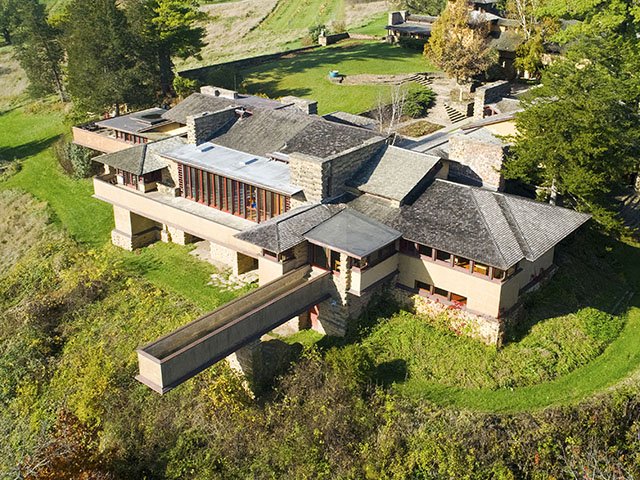 The 2008 best-selling novel, Loving Frank, told the tragic back story behind Taliesin, master architect Frank Lloyd Wright’s iconic winter home near Madison, Wis. Like many fans of the book, I hoped to someday see Taliesin, which in Welsh means “shining brow.” Someday came this summer.

Located on 600 acres in the still-wide-open spaces of Spring Green, Wis., Taliesin is a remarkable series of buildings, known for their forward-thinking design, sweeping vistas and tumultuous history. The World Monuments Fund describes Taliesin “as an autobiography, experimental sketchbook, and manifesto in one. It is regarded as one of Wright’s most significant and personally meaningful expressions of organic architecture evolving from the Prairie style.”

Wright began building Taliesin in 1911 for his companion, Mamah Borthwick Cheney, with whom he formed a union considered especially scandalous at the turn of the 20th century. Wright left his wife, Kitty, and six children for Cheney, who was married to one of his clients and had two children of her own. However, their time together at Taliesin proved short-lived.

Three years after its construction, Taliesin became the site of Wisconsin’s worst mass murder. In August, 1914, a crazed servant –– for reasons still shrouded in mystery –– bolted shut the doors, doused the floors with gasoline and set Taliesin on fire. A few Wright workmen managed to escape, but most of its occupants were murdered with an axe as they attempted to flee the flames. Cheney, her two young children, who were visiting for the summer, and four others died in the melee.

Wright, who was away on business, vowed to rebuild the structure, and did so, using some pieces of the original home in the 1914 version. Wright continued to revamp Taliesin’s interior and exterior spaces until he died in 1959.

Today, Taliesin visitors can choose from an array of tours, ranging from a two-hour “Highlights,” which includes both private and public spaces, to an even more comprehensive four-hour “Estate” experience. There’s even a “Loving Frank” tour, based on the novel, that runs one Friday a month from May to October.

Taliesin is one of 10 major Frank Lloyd Wright sites in his home state of Wisconsin, with several others located near Madison. I also visited his Monona Terrace Community & Convention Center. Wright signed off on the building’s final plans only seven weeks before his death, but his “dream civic center” didn’t get built until 1997. Music fans will want to check out the center’s roof plaza, where a plaque honors soul singer Otis Redding, who died in a 1967 plane crash on Lake Monona, where the building now stands.

The Unitarian Meeting House –– Wright’s own church –– is another of his Wisconsin-based National Historic Landmarks and one of his few “red tile” projects, meaning he designed both the interior and exterior.

But for me the highlight of my personal Wright tour was Taliesin, still a thing of beauty, despite the tragedy that unfolded there.