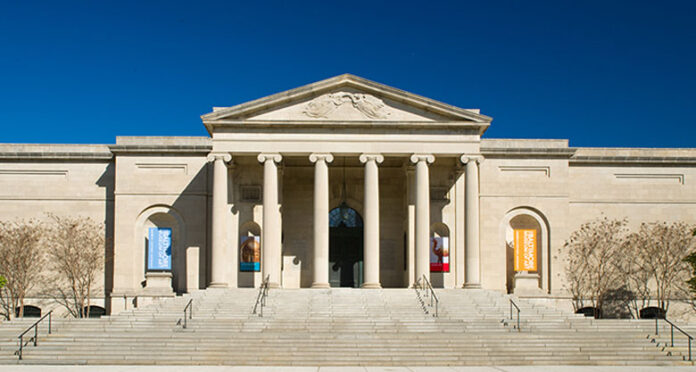 At the Baltimore Museum of Art, a pair of small dozing lions guard a side entrance. The Roman-temple-style building, designed by architect John Russell Pope – he of the Jefferson Memorial and the National Gallery — looms behind a grand entrance flanked by two, more superior, lions. My daughter works as an art conservator here, so a recent visit focused on this museum, which celebrates its 100th anniversary next year.

Founded in 1914, with only one painting, the Museum now contains more than 90,000 works, from 1400-year-old mosaics to Rodin bronzes, from a towering Tiffany window, African art, and European paintings to Early American furniture. Its chief glory, however, is the Cone Collection, donated by two sisters.

Starting in 1906. the sisters Etta and Claribel Cone, early patrons and friends of Matisse, made annual trips to Europe to buy the latest paintings, sculpture, drawings and prints. “The pictures covered every available inch of wall space,” wrote an impressed young nephew, “even in the bathrooms. They bought only what they really wanted and they loved all that they owned.” Thanks to their passion, the BMA now is said to own the largest collection of Matisse’s in the world.

A cabinet in the replica of their apartment contains drawers with postcards, linens, towels, jewelry, keys and boxes. We paused to rest on one of the two green velvet couches, before venturing out, refreshed, to rooms filled with Impressionist masterpieces.

Elsewhere in the museum, we were also encouraged to rest on Violetta and Swimmer, two large mauve and pink Franz West sculptures on display in the newly-renovated Contemporary Art Gallery.

In the two sculpture gardens, we reveled in twentieth-century works by Calder, Moore, Nevelson, and Miro, lurking among the fountains and azaleas. Lucky visitors may even see a small rabbit or two scudding by — they like to frolic under Barry Flanagan’s Boxing Hare on an Anvil. Or, have your picture taken reclining on Scott Burton’s Rock Chair.

After a feast of art for the soul, we adjourned to the outdoor terrace of Gertrude’s, for the Crab Cake du Jour. This suave restaurant, named after the owner’s grandmother, overlooks the gardens and specializes in Chesapeake cooking.

Chef John Shields, ‘the Culinary Ambassador of the Ba,y’ has hosted PBS shows and written a cookbook filled with “crabformation,” local history, tall tales, anecdotes, jokes – it’s a literary as well as culinary treat, with recipes from all the people who have settled this fertile land: from Native American, Polish, Italian and Virginian African Americans.

Lucky Baltimoreans also enjoy the Walters Art Museum near Mount Vernon Square, which Henry James called the most perfect square in North America. Upon his death in 1931, Henry Walters bequeathed the vast collection he and his father had built, and the palazzo-styled building that housed it, to the mayor and city council of Baltimore “for the benefit of the public.” The Museum opened its doors for the first time in 1934, with works of art spanning 5,000 years and five continents, including the entire contents of a Roman palace! Collections of Egyptian art, Ethiopian icons, medieval armor, illuminated manuscripts, and Faberge Easter eggs all lie in wait for the dedicated explorer.

An extra treat for Chinese blue-and-white junkies is the Asian collection in the adjacent Hackermann House. This period -furnished townhouse of an 1850s merchant contains the oldest surviving wooden Buddha in the world (7th c.) There are objects from Chinese graves, intricate snuff bottles, and sinister samurai armors. After savoring the glories of the Orient, you risk a stiff neck admiring the carved ceilings and swirling staircase.

From high art to jaw-dropping hijinks: the American Visionary Art Museum offers folksy and offbeat works that have flowed from the souls and imaginations of self-taught and outsider artists. A 55-foot whirligig in the main outdoor plaza offers a quick hint of what’s to come inside, while a meticulous model of the Lusitania, built from thousands of toothpicks, continues the adventure.

And if that isn’t quirky enough, intrepid museumgoers can also sass out the Museum of Dentistry — hmmm, more toothpicks? — as well as a Tattoo Museum, where you can get a custom-designed tattoo on site.