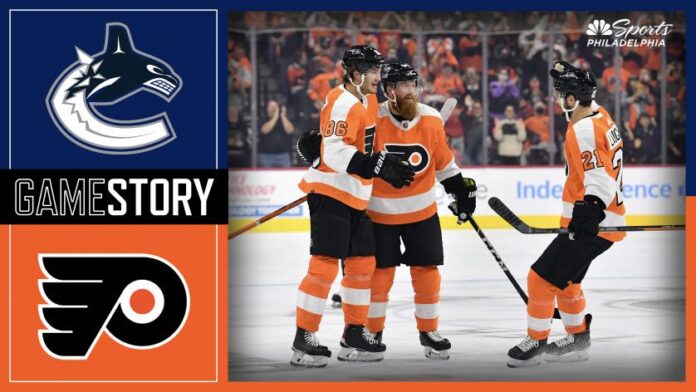 After playing their first two contests of the 2011 regular season on the road, many Flyers fans had their first opportunity to see the new-look squad with their own eyes. But more importantly, it was the newcomer’s first chance to play in front of the screaming, sellout crowd inside Wells Fargo Center. They, along with some familiar faces, battled the defending Western Conference champion Vancouver Canucks down to the wire and escaped with a 5-4 victory in the home opener. Claude Giroux notched a goal and two assists while Chris Pronger added a goal and an assist. Ilya played well, turning aside 36 of 40 Canuck shots.

Pregame introductions got the crowd into a frenzy even before the first puck hit the ice. “Let’s Go Flyers!” chants echoed in unison as members of this year’s group were introduced. It was evident that even before his first home game in a new city, Wayne Simmonds has become a Philly fan favorite. He, along with Giroux, James van Riemsdyk and Pronger, the Flyers newly appointed captain, received the loudest ovations from the 19,623 that packed the seats at “The Farg”.

Action began with a charged up Flyers lineup taking it to the Canucks, feeding off their first shifts in their home rink. After a Pronger dump-in, the puck caught a seam in the glass and shot out to Giroux in the slot, catching Canucks netminder Roberto Luongo by surprise and giving the orange and black a 1-0 lead. An Alex Burrows cross checking penalty shortly after led to a power play one-time blast off the stick of Pronger, something the Flyers missed mightily last season. Vancouver struck on a power play of their own towards the end of the first as Mikael Samuelsson found a loose puck in the crease that deflected off a blocked shot attempt and got it past an out of position Bryzgalov to cut the gap to 2-1. Only 1:18 later, James van Riemsdyk found himself all alone in front of Luongo and shelved a rebound to give the Flyers a 3-1 advantage. Philadelphia carried the play and spent sufficient amounts of time on the attack, having the 14-9 shot advantage and two goal lead to carry into the intermission.

The second stanza began with a continued Flyers attack and loads of time in the Canucks end. However, it was the Canucks that were rewarded for their efforts as Henrik Sedin cashed in off a Flyer giveaway to once again cut the deficit to one. The character and resilience of the orange and black showed up once again less than two minutes later as Jakub Voracek got his first of the season off a great setup and tremendous feed from Sean Couturier out of the corner. Vancouver struck again at the 4:29 mark of the period as Chris Higgins put in his own rebound after poor defensive coverage in front of Bryzgalov. With the score the Canucks looked like the Stanley Cup finalist many were expecting to show up, scoring twice in the period and outshooting Philadelphia 14-6 with relentless pressure to close the second.

The Flyers van Riemsdyk began the third period with a terrific scoring chance but seemed to be impeded on the way in. The Canucks took full advantage on the power play with a tic-tack-toe play ending with a Daniel Sedin wrist shot going top shelf and knotting things up at four. Again, the resilience and never let die attitude of the Flyers team shined once again. Danny Briere gained the Vancouver zone and caught Andrej Meszaros joining the rush and showed off some high cheddar of his own, beating Luongo over the glove to give the Flyers the 5-4 lead. After some solid penalty killing and a bit of luck to close the third, Philadelphia finished off the defending Western Conference champions, improving to 3-0 and keeping their perfect record alive.

Penalties were the big story of the final period, something that won’t make head coach Peter Laviolette a happy camper. Giving five opportunitie However, Philly’s penalty killing units were equal to the task. What may have been most impressive was Laviolette’s use of the young guns in the most crucial of situations. Along with experienced PK man Max Talbot and Andreas Nodl, Couturier and Matt Read were thrust into the spotlight and passed with flying colors. Of Couturier’s 17:45 ice time, 2nd among forwards mind you, 7:28 was on the penalty kill. Read racked up 16:34, 4th among forwards, 9:45 of that spent shorthanded. Read won himself a roster spot in training camp while Couturier’s play has speaked for itself so far this year. Both young men are progressing extremely well and have proved to coaches and management that their stay with the big club may be permanent.

1. #28 Claude Giroux (PHI): The man is the best player in the NHL right now, period. It will be a fun thing to watch as his shining star gets brighter and brighter.

2. #14 Sean Couturier (PHI): The more I watch this kid the more I become impressed with his play. He’s making an enormous pitch to be a full-time player. His PK abilities make him vital so far this season.

3. #20 Chris Pronger (PHI): It’s a beautiful thing to see that big blast from the point going in the net. Pronger needs to be that kind of player all year to keep the power play flowing.

Welcome Back Mike!
Many Flyers fans have circled home game #2 on their calendars this season. Saturday will be the homecoming of former captain Mike Richards as his Los Angeles Kings make an appearance at Wells Fargo Center on their second stop of their East coast road trip. Richards, who wears number 10 for LA, left Philadelphia over the summer in a sudden deal that brought Simmonds and Brayden Schenn to the Flyers.