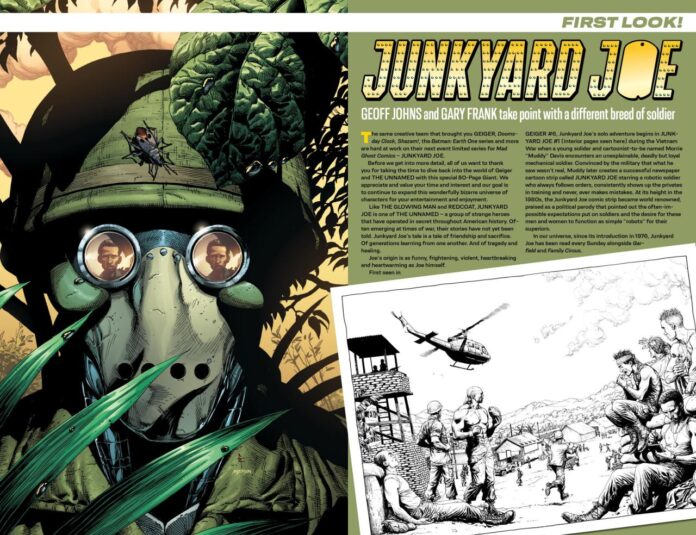 Would you believe that a comic book can make an actual difference in the fight against the plight of veterans? The country has many homeless veterans, and the problem seems to worsen yearly. Even with the different organizations coming in, the issue is still a national concern.

In the spirit of patriotism, Geoff Johns and Gary Frank, two tiptop comic creators, believe they can do something meaningful. They have put together a new comic, “Junkyard Joe,” which aims to improve the condition of the men and women who have served in wars.

Geoff and Gary believe they can help, so they’re working tirelessly to build “The Unnamed Universe.” Also known as the Geigerverse, the Unnamed Universe is a world of superheroes who have lived throughout history, and Junkyard Joe is one of them.

Both comic creators are grandsons of war veterans, so you’d understand why they have a strong connection with war veterans. They took a big, bold step and created a charitable drive by releasing the comic in black and white to wow the audience and contribute to a great, higher-level cause.

What You Should Know About Junkyard Joe

Released in October 2022, Junkyard Joe is a comic that centers on a robotic soldier. In the first issue, he is introduced as a killing machine that the US military uses during the Vietnam War. Possessing superhuman abilities, he ruthlessly kills America’s enemies and saves a platoon. In this video, you’ll learn that the army has programmed him to be a combat machine that cannot let his side down. Like Superman, he strives to protect America and its people.

With regard to the first issue, Geoff Johns says, “Although Junkyard Joe is set in the middle of a war-torn Vietnam and depicts graphic violence, the major part of the story takes place in the present time. The comic book is action-packed and fun, and has surprises for readers. The story itself builds the next block of the Geigerverse and expands the Unnamed universe in great depths and breadths.”

For Geoff and Gary, Junkyard Joe is a story created from the heart. It captures the story of an older man full of trauma and regret. He doesn’t see much of life ahead until, one day, his ex-partner shows up at the doorstep. If you’re wondering who the older man and his ex-partner are, you should grab a copy of the Junkyard Joe #1: Special Black and White Veterans Edition.

How the Comic will Improve the Lives of Homeless Veterans

It’ll be interesting to know that, apart from the storytelling, the comic creators have partnered with the National Coalition for Homeless Veterans (NCHV) and Veterans Aid (VA). The collaboration seeks to help homeless veterans live better lives now that they are no longer on the battlefield.

The comic book Junkyard Joe #1 has two releases; the standard and the special edition. The special one is only in very small numbers but sells higher. This is because the profits go to the charities mentioned above.

For every special edition comic book sold, $2 will go to NCHV and VA. The contribution is to help them assist abandoned and homeless veterans. Currently, there are almost 40,000 homeless veterans in the United States. Such people go through difficult emotional periods and need all the help they can get.

Both editions of Junkyard Joe #1 are spectacular, but it is the special editions that should capture those who have had loved ones on the battlefield. The comic storyline is a revelation of what happens and how emotions can flare in the midst of war. Be sure to grab a copy for yourself.

Everything You Need to Know About Streaming TV