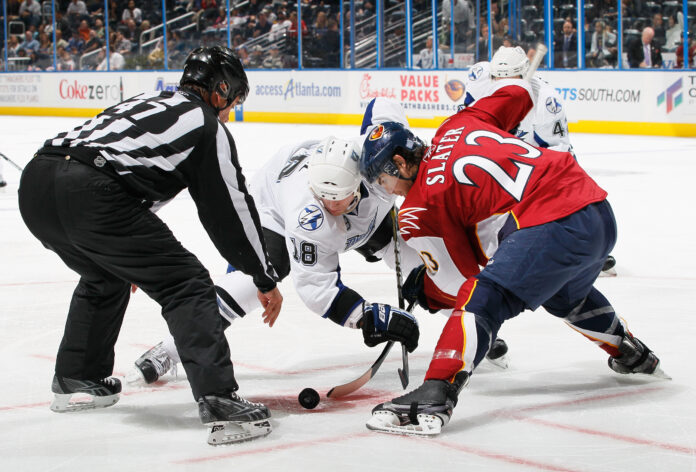 Hurricanes- All their work and determination came down to one game, the last of the regular season on home ice. A win would place the Canes in the playoffs while a loss meant a trip to the golf course. Tampa Bay came into RBC Center and sent Carolina packing for the links with a 6-2 loss. After coming so close a season ago, captain Eric Staal and head coach Paul Maurice have the Hurricanes battling hard in the division with powerhouses Tampa Bay and Washington and are on the precipice of a playoff run. There’s no doubt the team is young and with youth comes inexperience. GM Jim Rutherford added veterans Alex Ponikarovsky and Anthony Stewart up front and Tomas Kaberle to the blueline, trying to eliminate some of that rawness.

The Hurricanes were extremely impressed with the play of Jeff Skinner last season, as were many hockey enthusiasts. Skinner’s 31 goals and 63 points earned him the Calder Trophy as the league’s top rookie. He will need to repeat those numbers for Carolina to be in the playoff hunt. Staal also needs to return to the 100 point plateau to keep the Canes offense flowing. Fresh of his Stanley Cup run with Boston, Kaberle arrives to a Carolina defense that includes puck mover Joni Pitkanen, tough guy Tim Gleason, and the surprising Jamie McBain, who lead the defense in points last year. Kaberle will be a welcomed addition who can play big minutes and in all situations. Cam Ward is still a strong goaltender and kept Carolina from flat lining last season. With journeyman Brian Boucher in at backup, Ward may be spelled more often this season, keeping him fresh for the stretch run.

Booth and Weiss have developed some chemistry over the past two seasons and will benefit from the addition of Upshall or Versteeg to the top line. Jovanovski and Campbell will quarterback the power play, which ranked last in the league last year, and will supply the veteran experience needed for a defense that lacked physicality and scoring touch. Theodore gets the opportunity to start once again and will be sharing the crease with longtime backup Scott Clemmenson. Simply put, the Cats are in for another difficult year. They just don’t have enough pure goal scorers and consistent goaltending to be a playoff team. The additions will help for sure but it won’t be enough.

The defense gave up the second most goals in the NHL last year but has an offensive feel to it, with 50 point producers Dustin Byfuglien and Tobias Enstrom leading the way. Management wants Zach Bogosian and Ron Hainsey to step up their games and play a bigger role in the defensive scheme. The power play was good at times, ranking 12th last season and could be a top 10 unit this year but the penalty kill needs to improve upon its 27th ranking. Ondrej Pavelec is a good talent between the pipes but lacks solid consistency game to game. What might affect the Jets play the most this season is travel. Playing in the Southeast Division means road trips to Washington, Carolina, Tampa Bay, and Sunrise on a frequent basis. They will be logging the most “Jet” miles of any NHL team this year and may just wear out the players and team personnel those last few crucial weeks of the season.

1. Washington Capitals- Tomas Vokoun was the steal of free agency and will be the difference maker for the Caps. Stronger offensive seasons for Alex Ovechkin and Nicklas Backstrom will help propel Washington to win the division and compete for the top spot in the conference.

2. Tampa Bay Lightning- The Bolts are the biggest team on the rise in the Eastern Conference. Their offense is lethal and defense is solid all around. If Dwayne Roloson is up for another challenging run to the playoffs, this team could be back in the fight for a berth in the Stanley Cup Final.

3. Carolina Hurricanes- Eric Staal and Jeff Skinner will be relied upon to carry the bulk of the offensive load. After that it needs to be a team effort for this group to taste postseason hockey. If the defense can keep enough pucks out of the net, the Canes will get that extra win it takes to sneak into the playoffs.

4. Winnipeg Jets- The change of cities will benefit this mixed group of vets and youngsters. Playing in front of a sold out crowd pays dividends both on and off the ice. A playoff spot may be out of the question but the Jets will still be competitive and battle hard for the city of Winnipeg and its fans.

5. Florida Panthers- With so many new faces playing together for the first time, there really isn’t any chemistry which leads to problems both up front and on the backline. Jose Theodore is a good goalie but not one that can carry a team. Expect another struggle for success from the Panthers this season.