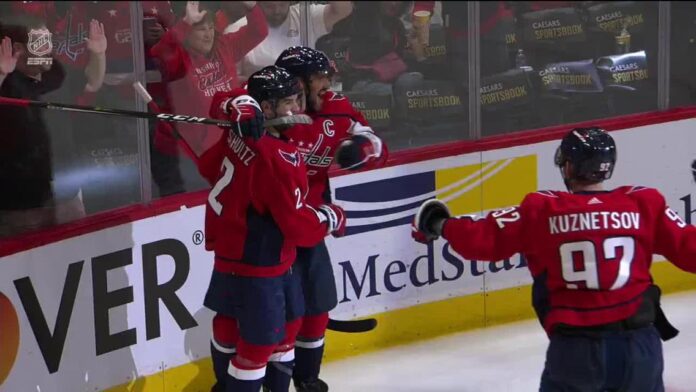 After showcasing their skills and battling one other on the ice for three straight days, Flyers rookies came together to face the biggest test of their young careers, beating the Washington Capitals young guns 3-2 in the 5th annual rookie game at Wells Fargo Center.
Garrett Ross opened the scoring for the Capitals midway through the first period, capitalizing on a Flyers turnover in the neutral zone while Stan Galiev picked up the primary assist on the tally. The Flyers penalty kill was solid in the opening frame, keeping the Capitals quiet after two power play chances thanks to several good saves by Notre Dame product Brad Phillips.

The second period gave the two teams a chance to open up and get physical: literally. Several big hits and three fights in the period gave the estimated 11,000 fans in attendance something to cheer about throughout the 20 minute stanza. The orange and black got on the board with a dazzling display of moves by Tyler Brown, who accepted the pass from Blake Kessel up the boards with speed and danced between two Capital defenders and beat Phillipp Grubauer through the wickets. The Flyers took the lead on a power play goal from Kessel, who snuck in from his point position, found a loose puck in the goalmouth and deposited it for a 2-1 lead midway through the second period. With only 20 seconds remaining in the 2nd, Flyers forward Thomas Hyka found his own rebound at his feet and got it past Caps goalie Brandon Anderson to give Philadelphia a 3-1 lead after 40 minutes.

Washington came out flying early in the third, cutting the deficit to one after Garrett Mitchell put in a rebound on the doorstep. From that point on, it was the Michael Houser show. Houser, who was a member of the OHL’s London Knights last season, made several key saves to keep the Capitals attack at bay throughout the rest of the third period and gave the Flyers a 3-2 victory. The win should go to both Phillips and Houser; each played extremely well and faced a number of quality Capitals chances.

Brayden Schenn and Sean Couturier, the two players many fans and team personnel thought would dominate the game, remained relatively quiet throughout the contest. Couturier picked up the primary assist on the Kessel power play goal and Schenn had a handful of scoring chances himself. Both players will be participating in Flyers training camp, beginning Saturday, and will have eyeballs glued to their every move, just as they did in the rookie game.

After signing an entry level contract yesterday, Blake, brother of Toronto Maple Leaf Phil Kessel, looked sharp and had good vision throughout the game, picking up a goal and an assist, earning him the 3rd star nomination by members of the media. The former New Hampshire Wildcat will most likely end up on the Phantoms this season but with seasoning and experience in the American Hockey League (AHL), Kessel has potential to make the NHL someday in the future.

Andrew’s Stars of the Game:
1. #67 Michael Houser (PHI)
-Was stellar from start to finish; quick and athletic form
2. #61 Thomas Hyka (PHI)
-Winning goal gets you in my stars of the game
3. # 42 Jason Akeson (PHI)
-Had terrific chances and sharp vision with the puck; hope he sticks around through camp