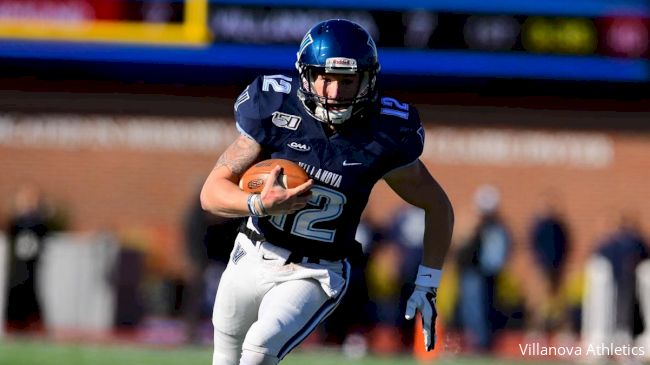 Villanova PA: As the month of September comes to an end and the teams finish off their non conference games, The Villanova Wildcats took on Towson Tigers to open up CAA conference play from Villanova Stadium on the campus of Villanova University on Saturday Afternoon during Parents Weekend. Villanova comes into game with 1-1 record and off a win over Lehigh last week while Towson enters game against Villanova off a win over Saint Francis last week. This game was broadcasted on CSN.

Villanova won the toss & deferred to 2nd half as Towson starts game with ball and they would go right down the field on the Wildcats for the games first points as RB Shane Simpson would punch it in from 3 yards out for 7-0 lead. The Wildcats would answer the Tigers scoring drive with a touchdown of their own when QB Zach Bednarczyk finds Taurus Phillips from 16 yards to tie the game at 7. Wildcats would take full control as QB Zach Bednarczyk would add 2 more passing touchdowns to Aaron Forbes and 2nd one to Taurus Phillips and the Tigers would try to keep the game close as the Wildcats would take a 26-14 lead into halftime.

The Wildcats got ball to start the 2nd half and both teams would struggle in the 3rd quarter with no scoring and field position battle. The scoring would pickup in the 4th quarter and Wildcats RB Javon White would score his 2nd rushing touchdown of the game, The back breaking play was late in the 4th quarter as Towson was driving down the field and Rob Rolle would pick off the pass int he end zone and take it back 100 yards for the longest play in Villanova Football history breaking the old record of 96 yards. The Tigers would add a touchdown by Sam Gallahan which would not make the difference. A crowd of 9,025 saw the Wildcats get off to a good start in conference play with a 40-21 win to go 1-0 in conference play, 2-1 overall on the season. The Wildcats would go on the road to play at Lafayette while Towson also goes on the road at Richmond.