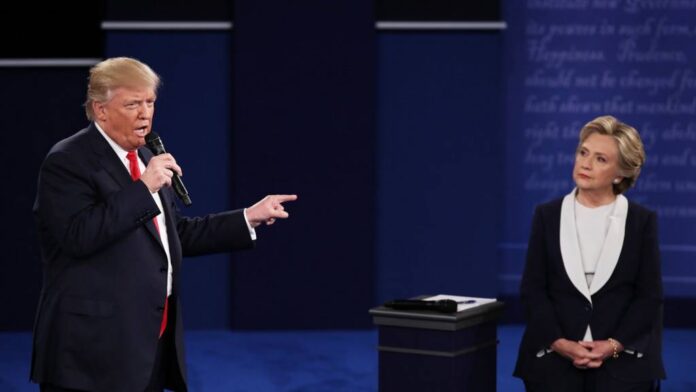 Recently all the media was focused on the final presidential debate between Trump and Hillary. The debate took place in University of Nevada, Las Vegas. For this historical moment Chris Wallace from Fox News was entrusted with hosting the show. All eyes were set on this event and it surely turned out to be a one heck of a battle.

At the start of the event, both of Trump and Hillary refused to shake hands. This set the tone for yet another fiery debate between the two.

FINAL PRESIDENTIAL DEBATE- TRUMP REFUSES TO ACCEPT POLL RESULTS
During the Trump vs Hillary final presidential debate, Donal trump was surely pumped up. At one point he told Chris Wallace, the moderator that he will not accept the result. He said that the elections are rigged. Moreover Trump stressed it twice during the whole debate.

Hillary Clinton termed it as horrible and said that it was a part of the strategy of Trump. She added that he blames the system whenever he is down.

CLINTON LINKS TRUMP TO RUSSIA
During the final battle, Hillary once again linked Donald Trump to Russia. She pointed towards WikiLeaks and added that there is evidence that Russia want to influence the presidential elections. Moreover she also reminded the public that Trump was actively encouraging Russia to commit espionage.

As a reply Trump said that Mr Putin does not respect Obama and Hillary. He also added that he has come to know that Putin has said some good words about him.
ALLEGATION BY ACCUSERS- TRUMP DENIES
Trump also said that the claims of the nine women regarding harassment by him are completely false. Moreover Trump said that he did not even apologize to his wife. The reason being that he has not done anything like that. Trump even added that nobody respects women more than him.

Clinton took advantage of the moment and made her remarks too. She said that Donald thinks that belittling women will make him bigger. Further she added that it could be a very dark vision for their country, if Trump is elected.

TRUMP ON MOSUL OPERATION
In the debate Trump labelled the operation to capture back Mosul from ISIS to be a political move. He said that this move was made by Obama in order to help Hillary. As an answer, Clinton denied what Trump said, but added that she supports the decision of Barrack Obama. She even went on to say that Donald Trump is always on a look out for the conspiracy theories.

CLINTON ON NUCLEAR WEAPONS
During the fiery debate, Clinton said that Trump cannot be entrusted with the nuclear codes. She said that the bottom line is that when the president gives orders, they have to be followed.
Responding to it Trump replied that he has the support of more than 200 military leaders.

TRUMP VS HILLARY- CONCLUSION
Hillary Clinton said Mr. Putin wants a puppet president in USA and want Trump elected
Trump stood by his pledge to deport the undocumented immigrants and building of a border wall
Hillary Clinton announce that if elected, she would bring the largest job program me in the country since World War 2
Mr. Trump blamed that Hillary and Obama were behind the violence in his Chicago rally, which took place earlier this year
Many people are debating that Hillary Clinton lead during the whole final presidential debate. Nothing can be said before the election. But it is for sure that sexual assault allegations, Trump has lost some battleground. Moreover, The Guardian commented that Trumps biggest grievance is his fear of losing the presidential elections. During the Trump vs Hillary debate, Trump called Hillary a liar. Moreover she called him a Russian puppet. It was obvious that both the contenders cam with full ammo. Now let us see what happens after the final polls.